And the winners are…

The Harvey Award nominations have been announced! The Eisners are in the books! And now we offer our annual corrective: THE INNIE AWARDS!

What does ‘Innies’ stand for? Well, other than an attempt at shameless self-branding, it stands for ‘independence’! Being ‘in’ the know! Part of the ‘in’ crowd! And possessing the non-freaky type of belly button.

Since we don’t have the big-time budget of the fancy-pants Eisners or Harveys, we’ve limited ourselves to five categories.  (Sorry Best Translation of Foreign Material for Tweens!)

Keep in mind that these are for comics that were published in 2014.

If the Eisners are the Oscars, and the Harveys are the Golden Globes, then the Innies are the Independent Spirits–or at least the People’s Choice Awards!

Now it’s your turn. Did we miss anyone or anything?

Oh, crow! That most foul-tasting, um, fowl. ‘Twas only a month ago I was bemoaning the continuing prevalence of superhero books on ye olde comics stand. And yet here we are, scarcely four weeks later, and no less than three such titles are being featured our hallowed list (and two taking the top slots no less!) In my defense, I did say that in the right hands, gold could still be wrought from the well-worn cape and tights set. The creators below have managed just that. To wit:

#5. Quantum and Woody #10 (Valiant): Look!  Up in the intro!  It’s a word!  It’s a phrase!  It’s Super Segue!  You bet it is!  And, so, well, this might hurt a bit: Speaking of wit: Quantum and Woody–a super duper hero book if there ever was one–has been full of it from the get-goat.  Here, though, the comic runneth over–and spiritedly so!  The Abbott and Costello of comedic crime fighting–straight man Quantum and wise-cracking Woody, respectively–find themselves in deep voodoo as Woody seemingly switches sides instead of simply splitting them, leaving Quantum in quite the buggy bind.  As the story takes shape, Woody’s questionable character is analyzed expertly by the heroes behind the heroes: creators James Asmus and Kano deliver a gay romp of painfully obvious punchlines and playful layouts–one that reaches around to the past for some insight into Woody’s relationship with the larcenous Jacklean; one that sees the images and words coming together to bust guts and gutters.  (Love, love, love how Woody–in a memorable meta moment–pushes aside the bars of his four-panel prison.)  Toss in a roundly panned appearance by the Swedish Chef and a surprising dash of sympathy for Woody, and we can’t help but confess: Quantum and Woody ain’t no joke; it’s a top book–as this super issue so heroically insists. (SC)

#4. Mind MGMT #22 (Dark Horse): After its ignominious appearance as The Biggest Dis(appointment) of last month’s list, Matt Kindt’s surreal spy masterpiece returns to rarefied form. As the plot explores the backstory of a splinter group within the overall worldwide conspiracy, the issue actually reveals itself to be a piece of art about art; the meticulous planning that goes into its creation, the frustration of failure, and its subtle, pervasive, and often unintentional influence. Kindt’s distinctly postmodern approach then, acts simultaneously as an apt metaphor for the book’s very existence, as well as catnip for art nerds (like me). The front-and-back matter that bookend the tale both take place in art museums, Marcel Duchamp is casually referenced, as is a supposed sequel to Double Indemnity (which had me immediately conducting Google searches to see if there actually was such a thing. I found nothing.) And talk about surreal – Kindt’s Magritte-inspired painting – whimsical, beautiful and oh-so-clever – is, as far as I’m concerned, already the cover of the year. (DM)

#3. The Massive #23 (Dark Horse): Brian Wood’s stripped down plot befits his story of survival at its most primal: at the end of the world a convoy of life-sustaining water crosses the unforgiving desert. The precious cargo, beset by thieves on all sides, is guarded by a small cadre of women led by the mysterious Mary, revealed at last to be akin to a goddess. The simplicity of the plot (matched by the bold, near woodcut-like art of Danijel Zezelj with colors by the peerless Jordie Bellaire) also belies the rich complexity of Wood’s themes: environmental degradation, the consequences of dwindling natural resources, geopolitical power and gender politics; and finally, and perhaps surprisingly, the remarkable resiliency of life in the face of devastation. (DM)

#2. Ordinary #1 (Titan): But enough of this hoity-toity art stuff! Postmodernism? Gender politics? We’re here to talk superheroes! Capes! Muscles! Lasers shooting out of things! The stuff of every boy’s fantasy! And in Ordinary, by Rob Wiiliams and D’Israeli, everyone gets to be one. Everyone, that is, except Michael. A middle-aged schlemiel, eking out a pathetic living, Michael seemingly exists only to be life’s punching bag.  When a mysterious event grants superpowers to everyone on the planet, Michael is inexplicably left out. Hilarity arises as Michael suddenly has to navigate the increasing insanity around him. And this book is funny folks. Talking bears, super-beggars and cabbie-gods, all are part of the surreal, new landscape (D’Israeli, working in an exuberant Neo-Pop Art style, absolutely goes to town). But there is also pathos, including an astonishing scene involving a lonely old lady. And Michael himself is basically a decent guy: when the world goes nuts, his first thought is his son’s safety (his second thought is to get a drink). And then there’s the satiric edge: by making Michael a balding, bespectacled schlub surrounded by fantastic superpowers, Williams and D’Israeli have created a wry stand-in for the sort of middle-aged man who reads this type of story to begin with (ahem). A sad sack protagonist, absurdist humor, underlying heart: this is the comic Woody Allen would write if he wrote superheroes. (DM)

#1. Dry Spell #1 (Action Lab): Ken Krekeler has made quite a statement with Dry Spell #1.  Good thing, too, considering his choice to start his story with someone else’s.  And that someone else just so happens to be comic book god Alan Moore, so, you know, no pressure, right?  Wrong!  Duh.  Because the quotation Krekeler has chosen as his first issue’s first words aren’t merely an epigraph that simply sets a tone for the tale to come; they are the opening salvo of a layered conversation about what it means to be an artist–about that will-o-the-wisp known as inspiration and the war that rages between activity and passivity; and, as the conversation develops, about the nature of superheroes and the duality of man, which makes sense, you know, with the whole Watchman thing that comes along with Mr. Moore.  Sure, Krekeler’s placed the burden on himself, but he’s clearly up to the challenge, just as, on page three, Apollo, the first hero to whom we’re introduced, is up to his: he’s seen carrying a passenger plane to safety–seen not just by us, but by the protagonist, Tom, as well.  He’s a cubicle jockey, who is, as we later learn, more than just some guy with an empty job, an empty relationship, and an empty canvas that’s more like a mirror that mocks him by showing him what he’s become since leaving the a super-powered life behind: nothing. His secret uncovered by a clever co-worker–who just so happens to also be a former costumed figure–Tom eventually finds himself at a club among powered peers, who seem to have designs on his ability to design things.  In a stunning psychedelic splash that stands as an exemplar of both Krekeler’s eye for color and his ear for poetry, a tripping Tom appears to fracture as two voices dance across the page: one his own, lucid voice and the other–neither still nor small–that leads him directly into temptation and into a sequence that delivers some serious tension, that is until Nightingale–a super-powered woman from the club with whom Tom has some history left a mystery–saves an unsuspecting woman from Tom and Tom from himself.  But to what end?  We’ll find out in a month’s time.  The immediate end, however, is a compelling story captained by a sympathetic character and an inspired take on the superhero set that courageously–and believably–promises Moore. (SC) 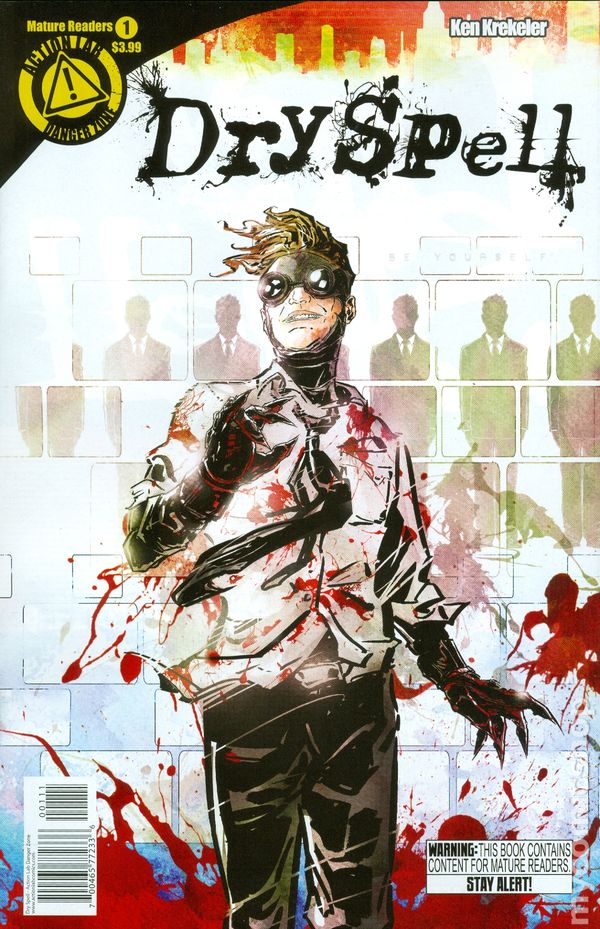 The Biggest Dis(appointment): Zero #8 (Image): Ales Kot’s Zero hit the scene late in 2013 and made quite the impression; in fact, it went from zero to eight–our #8 book of the year–after only four innovative issues, each a singular experience served up by an artiste du mois.  Man, we were high on this book.  Were.  Now, we’re pretty darned low.  As low as one can go, really.  Four issues into 2014 and Zero has gone from eight back to zero, coincidentally on the weakness of #8, this month’s mock minimalist offering.  See: to catch us up with Roman Zizek’s plan for Sara Cooke, Kot makes up for a rather remarkable dearth of dialogue and overall want for words by having artist Jorge Coelho pile on the panels–so many unnecessary, momentum murdering panels–and leave plenty unsaid, well, undrawn, giving us the responsibility of crawling through the gutters in order to bring some clarity to the narrative.  Comprehension be damned!  Yeah, what we’ve got here is not so much storytelling as it is story suggesting–often imploring that we suspend disbelief in order to overlook some absolutely absurd moments.  My disbelief?  Suspended from the gallows until dead, dead, dead–and buried along with my anticipation and any hopes that Kot will return to the form that forced us to take notice in the first place.  In fact, I’ll let Zero’s final words be my final words on Zero, as well: “I am here to tell you that I quit.” (SC)