A defining moment: my fifth-grade teacher confiscated my fresh off-the-rack copy of Captain Carrot and His Amazing Zoo Crew #1 because I was reading it in class–oooooh, a budding revolutionary!–instead of doing whatever stupid fifth-grade crap we were supposed to be doing that day.  I was like, “Hey!  That’s my comic!”  He was like, “It’s mine now.  Fifty states!”  I was like, “When am I gonna get it back?”  He was like, “Fifty states times two!  Want to go for three?”  I started writing out the fifty states, which was his favorite form of torture for us ten-year-old upstarts–kind of like waterboarding for elementary school kids; and as I did, he put Captain Carrot in the bottom drawer of his desk–with a squeak as it opened and a ca-thunk as it closed–and then went back to his business of teaching whatever stupid fifth-grade crap he was supposed to be teaching that day.

I never saw my comic again.

Ever since then, I’ve eaten no more and no fewer than two carrots a day: one carrot for me, which, according to Web MD is a classic coping mechanism, a way to fill a void in my life, probably related to, I don’t know, my father’s taking off when I was five, leaving my mother on welfare and cleaving from my younger brother and me a male role model, which caused the both of us to compensate by embracing by all accounts unconventional means to mold our otherwise amorphic masculinity, or to–and this is a bit of a stretch–my fifth-grade teacher’s stealing my freakin’ copy of Captain Carrot #1; and one cosmic carrot for Captain Carrot, my long lost–no, my long ripped off homie: that heroic hare who never had a prayer against the epic evil of Mr. G. 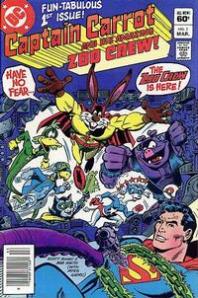 I miss you, Captain Carrot!