#5. Astro City #11 (DC/Vertigo): A quick perusal of our past Top 5 lists will tell you that we’re generally not the biggest fans of superhero fare. Oh sure, we have a soft spot in our hearts for the cape and costume set; they were after all our gateway drug into the wider world of comics. But with such a bevy of quality non-superhero books inhabiting the current comics landscape (it really is a golden age folks), why waste our time on the cynical merry-go-round of movie tie-ins, Big Events and the never-ending, never-changing battle? Even worse are those titles which claim to be edgy by adding some nominally ‘mature’ wrinkle to the works: ‘superheroes who swear!’ ‘superheroes who have sex! (full frontal!)’ or some other such trope that was well-worn by Watchmen nearly thirty years ago. It takes something far less gimmicky to add something new to the genre (and that’s what superheroes are, fanboys; not mainstream but a genre).

Luckily, in Astro City, Kurt Busiek and Brent Eric Anderson have managed just that. Nearly a year into the title’s return after an extended hiatus, Busiek and Co. remind us of their mastery of the eye-level approach to the fantastic. This time out centers around a personal assistant, the type of capable multi-tasker who’s invisible to the public and indispensable to her boss. But of course in this case, her boss is a superhero. Like many in her profession, her duties include, but are not limited to: answering mail, keeping track of finances, scheduling appointments, etc. But because her boss is a mystical Dr. Strange type, a missed appointment can mean placating interdimensional gods who threaten our world with annihilation for their inconvenience. The story is an ode to all of the unsung, behind-the-scenes supporting players who, through sheer competence, organization and the ability to keep a cool head, keep the world running, day in, day out. The pleasure comes from watching our harried-but-never-overwhelmed protagonist put out fires, ranging from the mundane to the apocalyptic, with nothing more than a well-placed phone call or a sift through her files. That, and the loving, sideways homage Busiek and Anderson have crafted to some of the stranger Silver Age forays of Kirby, Ditko, Lee, Thomas, et al. To paraphrase, there are a million stories in Astro City. This is one of the best. (DM)

#4. Silver Surfer #2 (Marvel): What goes on here? Two superhero books from the Big Two crack our Top 5? Well yes, when one of them is drawn by the inimitable Mike Allred. His wild, Pop Art aesthetic (enhanced by the bold hues of wife Laura Allred) immediately brings the fun to any book it graces. And Dan Slott scripts a tale to match involving intergalactic hucksters (‘the Incredulous Zed’) extra-dimensional god-constructs (‘The Queen of Nevers’) and sensitive Plorpian digestive systems. Not to mention the true protagonist of the story, one ‘Dawn Greenwood’ of Anchor Bay, Massachusetts. Appropriately titled “Everything And All At Once”, the story owes less to typically constrictive superhero dynamics, and more to the expansive exuberance of the likes of Douglas Adams and Terry Pratchett (despite our American creators, there is  something distinctly British about the proceedings; a compliment, naturally.) In other words, if you’re looking for a rollicking good sci-fi bender of a time (and why wouldn’t you be?), you could do a lot worse than Silver Surfer. (DM) 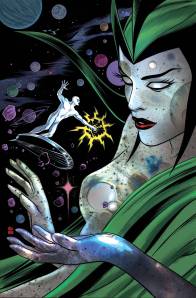 #3. Lazarus #8 (Image): Greg Rucka and Michael Lark are on quite a run: this is the third month in a row that we’re celebrating Lazarus as a top book.  (It’s true: check out what we had to say about the patient perfection of #6 and #7!)  What’s keeping the book pegged to the big board issue after issue?  It’s the storytelling.  The fellas have forged themselves a winning formula–one that’s made all the more impressive by the fact that in no way does it feel like they’re going through the motions; no, they’re keeping it fresh as can be, once again to purpose employing parallelism to amplify further the conflict, which has been an eager flame burning its way through a long fuse to an explosive effect without any bombs going off–at least not quite yet, anyway.  This installment of the 2014 Innie nominee for Best Ongoing Series is once again built upon a foundation of the early days of Forever.  In this case, Forever fails to live up to expectations and misses out on a meeting–on her birthday, no less!–with her frustrated father, who leaves a very significant gift behind: White’s The Once and Future King, an insinuation that speaks to Forever’s growth and purpose–and, in that, to Rucka’s inspiration for the series.  This significant sequence comes back around when present Forever finds herself in an ethical bind, knot courtesy of a catty Daddy Carlyle, over the impending terrorist attack in Denver.  Oh, the road to Denver is paved with good intentions, innit?   Doing most of the paving: Michael Barret and Casey, who, while on their way to the Lift Selection, are willing to offer up a hand to their fellow travelers, including, at the very end, an Angel of Death.  It’s all coming to a head, folks; and the book–and we–couldn’t be in better hands. (SC) 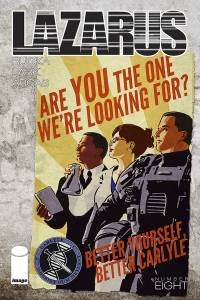 #2. Southern Bastards #1 (Image): Oh.  Shit.  Jason Aaron and Jason Latour have made quite a splash with their merciless ode to good ol’ boys.  Now, I’m predisposed to liking it because of its being not unlike Justified, with its Southern-fried setting and tone, and even its well-defined yet ambiguous cast of characters, smacking of the late, great Elmore Leonard, and, in that, the often late, great Garth Ennis–which makes even more sense considering that it also reads a hell of a lot like Fury: My War Gone By and Mark Millar’s Starlight because of the big notes of nostalgia and, tying it all together, because Latour’s Earl is plenty Parlovian.  The story’s solid from the get-go: Jason Squared pitches the prodigal son’s return and expertly upsells pathos as the conflict grows–just as a tree grows from Earl’s father’s grave–into the final sequence, itself a grueling duel of duels–a one-two combination (punishing blows received and delivered) of violent events enlivened by the lyrical layouts–that cements this debut as a top book of the month; it’s the love shown by the creators for the South and the story inspired by it that makes it even more than that.  (SC)

#1. The Massive #22 (Dark Horse): Thus far, Brian Wood’s apocalyptic take on Moby Dick has focused on one Callum Israel, whose Ahab-like obsession with finding his eponymous ship has led him to the far corners of a world that is slowly falling apart due to a mysterious event known as The Crash. The search has allowed Wood to explore in convincing detail (with the help of an impressive cadre of artists; here Danijel Zezelj does the honors, with Jordie Bellaire on colors) the effects of environmental devastation, economic collapse, and political disintegration in such disparate locales as Iceland, Hong Kong and Mogadishu. The sheer breadth of Wood’s geopolitical knowledge and inquiry is impressive. It also pulls off the neat trick of serving as both the series’ raison d’etre and narrative backdrop to its central mysteries: Where is the Massive? What caused The Crash?

Just as the answers have eluded the increasingly obsessive Callum (did I mention he was dying of cancer?), Wood’s writing has sometimes been frustratingly vague. Many of the arcs (all consisting of three issues) have run like this: fascinating set-up, high stakes climax, baffling denouement. While there’s something to be said for not giving the reader what they want, the considerable tension inherent in the story has sometimes been undercut by endings that seem deliberately anticlimactic, and even obtuse. Well the first issue of the latest arc, “Sahara”, finally promises some resolution, beginning with the one to the other great mystery: Where the hell has Mary been?

Mary, Callum’s lover, shipmate, and conscience of his crew, seemingly abandoned him in his time of greatest need. This issue finds her, in typical Wood fashion, smack dab in the middle of a geopolitical intrigue with real-world resonance. She’s guarding a convoy of the world’s most precious post-Crash resource: water. As the spotlight shifts to her, we begin to realize what Wood has been hinting at all along: the search for the Massive is a MacGuffin. All mysteries lead to Mary. By turns the most compassionate and the most remote, she has quietly taken on an otherworldly dimension. As we watch Mary cross the desert, now with child, one cannot help but think that as the series builds to its conclusion, Wood is countering the obsession and despair of the white whale with an almost biblical hope for salvation. (DM)

The Biggest Dis(appointment): Mind MGMT #21 (Dark Horse): To truly understand this choice, you have to understand that disappointment comes from expectations not being met–and in some cases, from expectations being bitch slapped by promises unfulfilled.  In this case, we were led to believe that master storyteller Matt Kindt was going to deliver a “silent issue”; and if you we’re like me, you thought immediately to the silent issue of all silent issues: G.I. Joe #21 from Larry Hama and Steve Leialoha, which blew our minds thirty years ago–yikes!  With the poison–the potent neurotoxin nostalgia–already in the wound, what chance did this stab at a silent issue have–especially after our being rudely welcomed by word one!  Wouldn’t you know: Kindt–ever the clever creator–was playing us from the promise!  His interpretation of silent: no dialogue–which means that thoughts are fair game; and to make the game more fun, those thoughts were insightful, sure, but sometimes ironic, considering the situations in which the thoughts were, umm, thought.  So, fine, it’s “silent,” I’ll buy it–and I did buy it, blissfully ignorant and high on hope; however, while the story works well within the world of Mind MGMT, Kindt has managed to both exploit and execute my innocent expectations.  The former finds me somewhat satisfied, but it’s the latter than leaves me mostly nonplussed–and this issue as our Biggest Dis(appointment) of the month.  (SC)