I went right for Batman #12, as most probably did. 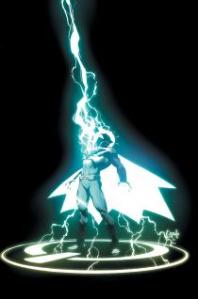 Sure, in wrapping up the Owls, Snyder fell prey to the monster that stalks every storyline from its beginning: its end; but he had been remarkably consistent up until then, turning us and twisting us like a bat in frenzied flight.  So, it was no surprise that I opened the book with the highest of expectations.  I turned the first page, the next—the next, even—and got all twisted up.  I looked back at the cover, went back to the story, la-di-da, got a fleeting fix of the Bat, was like “OK, whatever” about Harper’s bizarre fixation on Batman’s grip on the grid, and was ultimately distracted by the sudden change in the artwork.  But again, whatever.  So what do we have with this book?  An out-of-the-blue–but undeniably cleverly framed–origin that essentially reveals a secret Snyder’s been keeping since issue #1 and teases out in issue #7–not one that I had been thinking of, at all, really, if I’m being honest.  (I pulled #7 to see why the whole Harper Row thing didn’t necessarily resonate with me.  Seems that it has too many stand-out moments–including a few stunning splashes and the shocking panel in which Batman strikes Nightwing after Nightwing rips Bruce for keeping “[his] secrets,” which leads to Bruce’s revealing one doozy about Nightwing’s owly destiny–one that spurred conversation among Batreaders everywhere, leaving, in my case anyway, the mystery girl, Snyder’s  own heart-charging secret, forgotten in the shadows.)  A second read of #12 proved helpful in my overall assessment of the book.  I don’t dislike it.  I understand it’s a buffer between storylines and a set up, one with some sort of payoff somewhere down the line.  When it happens, it happens.  Until then, bring on the Joker!

So, then I read Suicide Squad #12.  Looks like I’m on board for the next few, at least.  That’s not what I was thinking at first, though.  From page one, I wanted each of the the Squad members to be sacrificed to the god of comics that had run their course.  But, the draw of the series–the fact that you can’t see through to Glass’s plot twists, even when you expect them–was drawn up well enough at the very end of this issue, even after what felt like an otherwise rushed story.  Hey, I’m a sucker for sleeper agents.  Got a problem with that?

Frankenstein #12 is a helluva fun ride.  I’m telling you: Kindt can’t miss with the route he’s running here–not when he’s got Frank critiquing poor pyromaniacal poetry: “Work on your rhyme and meter.  Frankenstein does not kill the inept.”  Great stuff.

Well, then Daredevil Annual #1 has nothing to fear from Frankenstein.  It’s a billion pages of blech.  I don’t know; perhaps Alan Davis fans will see something in here worth celebrating. Hey, howzabout the Haitian Jar Jar Binks with the “gris gris and the ‘pwen”?  Maybe?  I suspect, however, that even they are wondering what good they could have done with the $5 they turned over for this disaster.  Ugh.  Maybe I should’ve bought Ozymandias, after all.

I enjoyed Archer & Armstrong #1.   Henry’s art is very good.  It’s clean, kinetic, and carries the story of A&A’s coming together well–even if it’s a story we’ve heard before in some form or another.  Am I’m willing to invest in the idea of The One Percent and their Nazi-esque occultist bent?  Yeah, why not?  And, come on: the bull and the bear masks are pretty funny–maybe too funny, actually, especially for the now-turn-the-page-and-dun-dun-dun-here-are-the-villains-for-the-first-story-arc moment.  I mean, I’m half expecting an opposite-of-erotic orgy scene to erupt out of nowhere and half expecting to see the leader of The One Percent unleash the Horns and the Claws on NYC to take down the cowled and caped soul of the city.  Am I the only one?

And that leaves one book for the Scottlight: Spider-Men #4.  Check back soon to see which way I go with this one.