I’m up to date with my reading.  Writing-wise, as you’re about to discover, I’m a bit behind; but I couldn’t let these books slip by without a word or two.

Saga #11: Opened it up and said, “Hello”–not like “Hello, hi, howya doin’?” but more like “Hell-oh!” in response to yet another remarkable salutation–a tantalizing and titillating page one–from Vaughn and Staples, one in which we find Marko and Alana coming together in a coital splash, followed by a delightfully daring debate that glows like an after-sex cigarette.  That scene is cleverly coupled with The Will’s wordless yet startlingly intimate retrieval of Lying Cat, made possible only by the bounty hunter’s discharging of a decidedly phallic device.  That bit of brilliant storytelling from the book’s creators is humbled, however, by the burden taken on by Barr, Marko’s father.  Be honest: have you ever believed a character more than you believed Barr when he tells Alana, “I’ll hold us together”?  You know that rare rush you get from an unexpected brush with beauty?  Yeah, got that–and more: I mean, have you ever hurt as much as when Barr passes on while peering into Hazel’s “peepers”?  Have you ever tasted as bittersweet a morsel as when Marko manages a magical father-son memory, one cleverly conveyed in two languages, including one we all understand: the language of love?  And for good measure, older Hazel’s commentary ties it all together with a gentle tug or two on our heartstrings–with a final line for the ages.  Truly inspiring work. 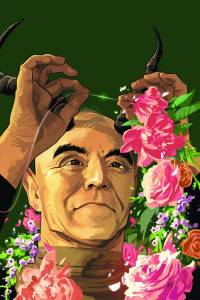 My?tery Society Special 2013: Frivolous fun!  Steve Niles and Andrew Ritchie bring together mystery and monsters and, in doing so, deliver the goods and the chivalrous evil, particularly in the form of the gentlemanly Dracula, who steals the show even as he not so surprisingly fails to show up in the book’s final gag: a vampire-free group photo.  Niles’ immaculate timing sells the decidedly dessicated humor, which helps to keep the confidently-wielded familiar–which reminds us of our favorite stories, be they bound to page or screen–as fresh as an undead daisy.  I welcomed the whiff of Frankenstein, “however brief it was”; see, I’ve been in a wicked state of withdrawal since the demise of the fantastic Frankenstein: Agent of S.H.A.D.E. and since I dropped the disappointing JLD–so I’ll take what I can get! 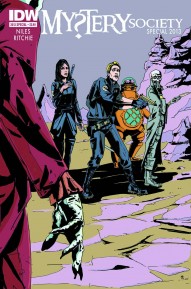 Five Ghosts #1: Overreaching and underwhelming.  Frank Barbiere throws a lot at us in this first issue of a five-issue mini.  He kicks things off well enough by introducing us to Fabian Gray, an Indiana Jones-type–almost necessarily kicking Nazi ass–blessed and cursed with an assortment of skills derived from five literary archetypes, not entirely unlike Captain Marvel, who too derives his powers from a pantheon of legendary figures.  This one-man League of Extraordinary Gentlemen has some “unfinished business” of a personal nature that he harps on, and then he eventually–after some more harping and an evil-spirited interlude or two–hops on a plane to Africa, where things don’t turn out so well for him–or for us, if I’m being honest.  Africa?  Really?  Already?  Sebastian says it best: “I’m guessing that means something bad.”  What’s not so bad about the book?  Chris Mooneyham’s art is, in and of itself, fine; however, he’s hamstrung a bit by Barbiere’s ridiculously fast pace; and, as a result, too often he’s unable to bring the requisite energy to the page.  Overall, looks like Barbiere is shooting for novel-level complexity to suit the allusions at the center of his concept.  Unfortunately, the result is a few frayed narrative threads.  Will I pick up #2?  I’m thinkin’ it’ll be a comicday decision.  At the rate I’m shedding books, odds are good this’ll sneak its way back into my bag.  And then if I’m two-deep into the series, you know I’ll run it out till the end.  (That’s my blessing-slash-curse.)  Here’s to hoping these two fellas find their groove–because at the core of this story is something I might like to get into. 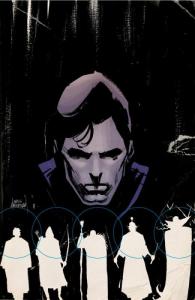 Ultimate Spider Man #21: We kept asking for it and darned if we didn’t get it: a costume-free issue!  And a damn good one, too.  Bendis spares the spandex and spoils us with angst and honesty; he–like a genie granting wishes–serves up a teenage boy’s dream team-up: Miles, Ganke, Mary Jane, and Gwen Stacy.  Gotta love it and the possibilities.  Also gotta love the way Sara Pichelli and Justin Ponsor bring the fantasy to life.  The art is terrific throughout and terrifying when it needs to be.  Yeah, at the start of this arc, I thought Venom would be narrative poison; but I put my faith in Bendis, and it turns out that my faith was put well.  This is an intense issue.  It’s an exemplary issue.  It cements this title as one of Marvel’s best, and it’s another reason why I feel comfortable buying All-New X-Men and Uncanny X-Men despite my lingering doubts about those titles.  Bendis can be this good at any time–and I’d hate to miss it when it happens. 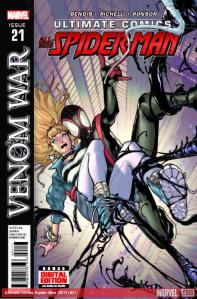