I guess I’ll start with a couple of books that were rotten as a rule: Swamp Thing #13 and Animal Man #13.  Mirror images of one another, these two books build the foundation for Rotworld–the former focused on the Green, and the latter, its locus, the Red.  Even though the stories follow almost identical arcs, in round one (as if this is a boxing match between flora and fauna), I’ve got to give the edge to the walking compost heap.  Scott Snyder’s story grows a bit more organically; and Yanick Paquette’s art–especially the layouts–is at its series best.  In terms of where each ends–a decided difference, indeed–it’s an absolute fact: I’m more interested in Abigail’s fate than I am in Ellen’s.  I’m pretty sure Abby’s not dead, despite what the Parliament professes; but I’d still like to see how the situation plays out.

Derek Mainhart: I had a mirrored reaction to yours: I liked Animal Man better. The endangerment of Buddy’s family seemed to raise the stakes higher than in Swamp Thing (though I could have done without the return of Shepherd, the Red’s answer to Jar Jar Binks). But then it almost seems odd to contrast the two books, since they really are different chapters of the same story. I admire the level of craft going into the writing, as the books are nearly symmetrical; a level of synergy rarely seen in crossovers. “Organic” applies in every sense of the word.

SC: Thanks to the last two pages of Daredevil: End of Days #1, I’m pretty sure I don’t know if Daredevil’s a dead devil or not.  I mean, the dude should be dead: Murdock’s murdered in full view of a mob of indecent flashers; and it’s the mob of Awful Samaritans’ impotent images that bring the bloody end game to life, providing the proof of Bullseye’s coring of ol’ Hornhead.  So who the hell is that at the end?  Does the Hand have a hand in this?  (I deserve a high-five for that one!)  The big four hands involved with putting this tale together have crafted something graphic and gritty: Klaus Janson and Bill Sienkiewicz deliver on the viscerals–I mean, visuals; and Brian Michael Bendis bends DD backward–essentially turning a blind eye to what Waid’s doing right now on Marvel’s best book, hands down–toward the the darker tone of his own successful run on Daredevil (Vol. 2).  Where’s David Mack’s hand in all of this?  It’s not where I was hoping it would be, that’s for sure.  I guess this storyline isn’t exactly where I was hoping it would be, either: it seems to rest outside of continuity.

DM: Yeah this seems superfluous. It read like “What If…..Brian Michael Bendis continued writing Daredevil????” It’s a shame because the ending that Benids did supply to his run was just perfect. I was also expecting some David Mack art. As it was, the art seemed as muddled as the story. Klaus Janson is a wonderful artist, but generally stronger as an inker in my view. Bullseye? The Kingpin? In light of Waid’s current, excellent work, this reads like a re-run.

SC: Even still, I’m prepared to give it another issue or two.  I mean, I was down on the idea of Spider-Men, and, boy, did I end up with web on my face with that one!  Time to dial up the expectations!

Dial H #5 certainly lived up to expectations–expectations that were sky high after a dialed in #0.  China Mieville continues to untangle the wires, allowing us to learn along with Nelson about his dial–one without a phone, without a booth; one he dials while calling on “a Superman.”  Even Superman, however, couldn’t have seen this one coming: Cock-a-Hoop?  I was cock-a-hoop myself as I witnessed this next round of wackiness, this epic battle–drawn up epically by Mateus Santolouco–that leaves some victims in its wake and presents a new challenge for our hero and his elderly sidekick Manteau.

DM: I still can’t believe this freak show of a comic is a DC book. The New 52 can be marked a success if for nothing else than this book’s existence. Mieville’s writing, though occasionally hard to follow, is never less than inspired. To wit: “When nothing eats nothing? It leaves anti-nothing behind. Somethingness.” Brilliant? Claptrap? Whatever man, I’m lovin’ the ride. 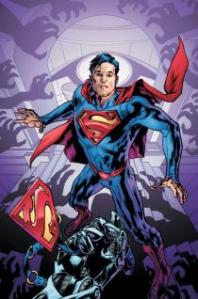 Action Comics #13 certainly doesn’t–it couldn’t possibly–meet the otherworldly standard set by #0.  It does, however, have an exciting–if not slightly confusing–reimagining of the Phantom Zone, with phantastic art from Travel Foreman, who set a phreakin’ high bar over on The New 52’s Animal Man–one not yet met, despite some good work from Steve Pugh et al.

DM: It was good to see Foreman’s work again. He does a nice job. But given the sparsity of the interdimensional setting, I think the colorist, Brad Anderson, deserves a lot of the credit for the overall look of the book.

SC: Noted.  But what really struck me–what drew a tear of joy from me–was the page turn from page 23 to 24: there’s Krypto, who “waited and waited for what felt like a thousand years–for Kal-El, his Kal-El, [I’m tearing up just typing this] had promised he would return”; and–turn the page–wouldn’t you know, “Kal-El never broke a promise.”  No, he doesn’t break promises.  That’s what makes him Superman.  That’s what makes us love him–whether we’re 9 or 90.

DM: Don’t hold back man! It’s ok! I’m right there with you. Morrison, more than any writer in recent memory, knows what a Superman story is supposed to be. Month-to-month continuity concerns, cosmetic changes, new villains, etc.; all of that is secondary. Superman exists for the big, goose-bump inducing, awe-inspiring moments. And that’s what we get here.

SC: Morrison is making magic–and is conjuring up a showdown with Mr. Mxyzptlk to prove it–which makes his impending exit all the more difficult to deal with.  Maybe if we get him to say his name backwards…