This week, quantity marries quality.  The bridal bed: my bag. 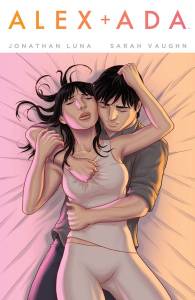 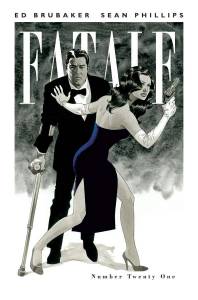 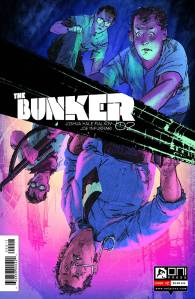 Extreme Makeover Edition! This month’s list features five new titles. That’s right: not one of the books from last month’s list is making a repeat appearance. For those scoring at home, that’s the first time that’s happened. Two ways to look at this: last month’s titles par excellence took the inevitable step back (alas, this is partially true – I’m looking at you, Saga!) Or, you may arrive at the conclusion that we have after making these lists every month: there’s a ton of great new comics being produced right now. Really, just the 5 below titles alone represent a cross-section of material that either you, or at the very least someone you know, would get a tremendous kick out of.

5. The Sandman: Overture #1 (DC/Vertigo): This one comes as no surprise. Neil Gaiman, one of the most celebrated writers of our time, makes the long-awaited return to his signature creation, The Sandman. What is surprising is how easily Gaiman re-envelops you in his world. That would be the world of Dream, the name of both the title character and the realm he is lord of; the Endless, his immortal brothers and sisters, each representing a facet of existence that starts with the letter “D” (like Gaiman’s winning goth-punk-cute take on Death); and the host of mythological beings, endearing and terrifying, that were introduced during Sandman’s original, legendary run. This could easily have been a greatest hits tour; give some page space to old fan-favorite characters, indulge your readership’s sense of nostalgia, and call it a day. Gaiman does indeed deliver on both these counts. But what quickly becomes evident is that what is missed most is not the characters, nor even their fantastical world; it is Gaiman’s voice. Alternately warm and wise, mysterious and remote, it has more magic in it than all of the wings and wands and arcane trappings that pass for so much of fantasy these days. And I haven’t even mentioned J.H. Williams art yet. Exquisite draftsmanship, a painterly palette that ranges from monochromatic to kaleidoscopic depending on the scene, eye-popping design that includes double and quadruple-page spreads (you’ll have to see for yourself); suffice it to say that, other than his longtime partnership with Dave McKean, this may be Gaiman’s most fortuitous artistic pairing yet. And that is saying something. A most welcome return. (DM)

4. Wild Blue Yonder #3 (IDW): After a brief hiatus, Wild Blue Yonder soars back onto the scene without having missed a beat.  That’s right: it’s another action-packed issue from the terrific team of Mike Raicht, Zach Howard, Nelson Daniel, and Austin Harrison, who are well on their way toward cementing this series as one of the year’s best.  Every note is played perfectly, as one might expect after two smartly developed  and beautifully rendered issues.  Chapter Three takes off with a testosterone-fueled test–one that leaves Tug, the clever new gun, with a sore jaw, a result of the unimpressed Scram’s heavy-handed assessment–and lands with a low-fuel rescue and a highly-anticipated kiss.  (Looks like Tug’s jaw was all right, after all.)  The care taken to craft such a superb story arc is reflected–more, it’s amplified–by Howard’s art and Daniel’s colors, which together capture both the chaotic and the tender moments with remarkable ease–with no better example of the delicate balance struck issue-wide than the absolutely stunning double-page spread that rests at the heart of this fabulously fun book.  Despite that romantic scene and the kiss that closes the chapter, we’re still left with the knowledge that Tug’s loyalties lie elsewhere–with the Judge.  Hey: he may be coming around to the cause; or maybe he’s simply playing Cola for the free-spirited fool that she is.  Who’s going to win this war of Tug?  Please, please, please don’t make me have to wait another three months to find out! (SC)

3. Mind MGMT #16 (Dark Horse): At sixteen-issues old, Matt Kindt’s magnum opus is clearly the most mature book on our list, but don’t let its age fool you: it’s still contagiously kinetic and impossibly unpredictable–especially here in this expectation-erasing one-shot, which showcases Kindt’s incomparable ability to marry his watercolors and his words.  Once again, he “escape[s] into books” and plays both sides of the unique relationship between reader and writer, tapping into the fascination, obsession, and madness of this novel form of unrequited love.  Kindt takes a risk as he builds this complex character study on a character who’s important to the overarching storyline, sure, but in whom we’ve yet to make a significant investment.  The risk pays off: he fills up the blank spaces in the Eraser: he sets up and sells Julianne’s psychosis, her rapid divorce from reality, by literally drawing what’s going on in her mind and, as a result, figuratively drawing us into it.  We follow her, observe her, as she follows and observes; and her anxiety, which builds with each panel, parallels ours–not surprisingly thanks to Kindt’s attention to detail as he creates a memory game of sorts throughout the issue: one in which he challenges us to see patterns, subtle parallels between one panel, one page and another, even as Julianne’s own memory seemingly fails her–particularly in terms of her husband, the author of her obsession, Philip K. Verve.  Whether it’s a crescendo of phantom “taps,” a persistent mask of pipe smoke, or a face left unfinished, Kindt cleverly details her descent all the way toward the penultimate page of the story proper: a stunning splash, which, ironically, after an ascent–of stairs, anyway–brings the fictitious relationship to its inevitable, bloody end.  From the beginning, Mind MGMT has been a comic book experience unlike any other.  This issue may very well be the best of the bunch: it engages us as fully as the medium can; and, as Kindt writes through his art (see below), he manages to get us to think not only while we’re lost in the story, but long after we’ve finished reading it, as well. (SC)

2. Afterlife with Archie #1 (Archie): This was, perhaps, inevitable. We live in a mash-up world after all. Bluegrass techno music. Superheroes on Broadway. Bacon and everything. Add the seemingly undying craze for zombies, and it’s actually surprising it took this long. Now, at their worst, these types of amalgamations are self-indulgent exercises in pointlessness. And yet, there’s something about this... Just reading the title gives rise to an involuntary smile. The prospect of throwing those beloved, unaging teen icons and their whitewashed Norman Rockwell existence into a flesh-rending, post-apocalyptic fervor holds the excitement of both a dare and a promise. Indeed the difficulty may be in staying true to the Archie half of the equation. For this to work, there has to be a genuine understanding of these characters and their world; otherwise it could easily descend to a Mad magazine parody. Luckily, writer Roberto Aguirre-Sacasa seems up to the task. (His work salvaging the aforementioned superhero musical may have provided good training ground in the mash-up dept.) These characters act the way they’re supposed to; the corny jokes, the anachronistic cat-fighting of Betty and Veronica. But then there is the palpable mood of creeping horror, thanks largely to the stunning art of modern pulp-master Francesco Francavilla (which is, by itself, worth the price of admission – honestly I would’ve bought a regular issue of Archie Digest if Francavilla was drawing it. Note to self: Digest Archie would’ve been a great alternative title for this book.) Aguirre-Sarcasa promises much darker times ahead. The thrill of this book will be seeing how far he can go while still having it be recognizable as an Archie comic. It’s quite the task he’s set for himself. And if he goes too far? Well, that could be fun too… (DM)

1. Zero #2 (Image): Issue one was pretty good: Ales Kot presented a espionage/black-ops story involving a superhuman arms race. Not the most original concept, but placing it in the context of the ongoing Arab-Israeli conflict gave it a certain edge, aptly rendered by Michael Walsh’s choppy, early-Mazzucchelli realism. Issue two is a different beast entirely. The mysterious operative, Zero, is still the main character. We are again witness to a political assassination. And yet the tone couldn’t be more different. Whereas the first issue was all brutality and military jargon, the second issue balances the awful goings-on with a poignant tale of innocence lost. Or more accurately, torn away. In this issue, we flashback to Zero’s childhood. The sweet, unaffected cadence of his young view of the world is set side-by-side with the harsh nihilism of his education in sanctioned murder. This duality heightens the mood of each, a quality that extends to the art, which also couldn’t be more different from the first issue. Tradd Moore’s work exudes the literally wide-eyed, childlike perspective, without skimping out on any of the violence, by employing linework that has more of a late-Mazzucchelli grace; a clean, exuberant style suggestive of animation, or dare I suggest, even a touch of Al Hirschfeld (I’ve never before encountered an image of a brain-splattered assassination in which I wanted to count the ‘Nina’s‘.) In presenting two initial issues that attack his basic premise from wildly different angles (and artists), Kot has proven himself quite the chameleon, and hopefully set up that rare book in which, month to month, you truly don’t know what to expect. Book of the Month. (DM)

Welcome to the dis, Mr. Soule.  So you know, the next few lines are going to be rough.  A bunch of over-the-top positive reviews and a TV deal in the works don’t really prepare you for being The Biggest Dis(appointment) of the month–but you’ll get through it.  They all do.

If I’m being honest, your being here isn’t really your fault.  Your book’s actually pretty good.  In fact, the first page is “something else,” and the introduction to 44 is expertly done; we know exactly what kind of man he is in four pages flat.  Your dialogue is sharp and naturalistic; and Alburquerque’s art does its job.  But my perspective changed after the abrupt insinuation of the, umm, extraterrestrial problem.  And you knew it would, didn’t you? I mean, you had the President-elect express–perhaps even more accurately–exactly what I was thinking a couple of panels later.  Clever, sir!

Now don’t get me wrong: I can suspend disbelief with the best of ’em.  Problem is, my disbelief immediately got suspended alongside several former disbeliefs that got strung up as a result of my having endured rockbusters like Armageddon and Deep Impact, and the soulless Independence Day.  It’s an inglorious gallows, indeed.  So, expectations?  Exploded.  A big budget’s worth of bust for only a buck!

As the issue wears on–and it does–it wears the White House well; the crew of the Clarke, well, not so much.  But, hey, it happens.  In this case, it is your fault for having created such a strong character in President Blades.  Any time he’s not on the page, however, the story suffers–but not as much as it suffered from its not living up to the previews and reviews that held it up to the heavens.

I think you’d agree: it’s not quite there yet.  I mean, at this stage, the core of Letter 44 is nothing more than a mostly familiar concept.  But will I give your book another issue?  Sure I will.  Will your book eventually meet the hyperbolic expectations heaped upon it–if not in #2, sometime soon?  Will it play more like an artsy independent film and less like a brain-dead blockbuster?  I have no idea.  Heck, I’d be happy if it meets the humble expectations I’ve now tied to it.  But as it stands, I expected more from this, which is why your initial offering has earned a dis. (SC)