Four days in the hot-spot money pit that is Montauk have me hoping I’m not going to miss some of this week’s big books.  With apologies to Van Halen:

Vacay will keep me from the store

Doesn’t mean I won’t get out to Android’s to pick up these books, some semi-good lookin’ and some–mostly from the increasingly impressive Avatar Press–downright I&N Demand. 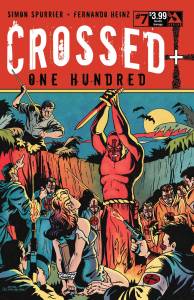 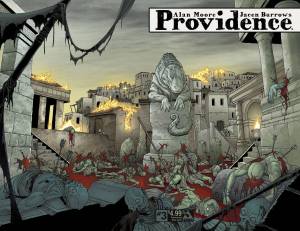 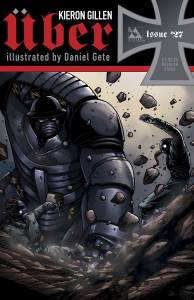 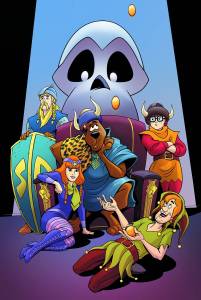 Android’s Amazing Comics, my HQ for all things comics, upped the usual Wednesday ante by hosting the very talented–and, as a result, very busy–Marguerite Bennett, currently killing it as a co-writer–along with the incomparable Kieron Gillen–on Marvel’s Angela: Asgard’s Assassin, for their first big signing event.

And big it was!

My daughter–she a knowledgeable comic book fan of three–and I hit the shop in hopes of scoring a three-inch pinch of books, including Marvel’s big Star Wars relaunch and the final issue of Fraggle Rock: Journey to the Everspring (Archaia/BOOM!).  I arrived armed with previously purchased copies of the aforementioned Angela in the off chance I’d be able to get a minute with Ms. Bennett.  Android’s was buzzing like I had never seen it buzz before; but, despite the hubbub about Ms. Bennett, it appeared that the off chance I had been banking on was definitely on.  I snagged my bag of pull books, strafed the shelves for picks–the whole time surprised by how well-behaved my daughter was–and then got on line to meet the Woman of the Four Hours.

As my curious kiddo checked out the toys on the wall–surprising me again by revealing that she knows quite a bit about Minecraft–I waited behind a well-prepared Bennett fan, who asked for and graciously received autographs on a bunch of books, which once adorned with the writer’s signature–and after a quick photo taken by someone milling around to the right of the table–were swung over to the big island of back issues in the middle of the store and immediately bagged and boarded for safe keeping.

No joke: in a smooth move that I didn’t anticipate, the picture taker sidled into the space vacated by the fella who was already furiously bagging and boarding his Bennett bounty.  He had a copy of Batman: Joker’s Daughter ready to slide under Bennett’s pen and a flurry of questions that reminded of the speed round from the ’80s game show $ale of the Century.  Ms. Bennett handled the barrage as if she were the returning champ, offering up patient answers, even as the line behind me grew and grew–almost all the way to the door!

My daughter, unfortunately, hasn’t quite mastered the art of patience; you know, her being three and all.  After having named all the hero and villain statues on shelves just above the new releases–and mistakingly identifying The Flash as Green Lantern (I know, right?)–she became a bit hard to handle.  I was determined, however, to meet Ms. Bennett; so I asserted myself in a fatherly manner until the incontinent quizzer squeezed out his final query, which, like many before it, was prefaced by a desperate question-catching “Umm…”

I approached the table, semi-sure that the gentleman was finally out of questionition.  Ms. Bennett greeted me warmly and, over the course of our brief Angela-centered conversation, proved to be incredibly down to earth, especially as she responded to my question about her working with one of my favorite writers, Kieron Gillen.  She had nothing but great things to say about the experience, admitting along the way that Gillen is pretty darned meticulous–that he’s got a pretty specific vision for each and every panel.  As my daughter pointed out Scooby-Doo and Doodle Jump, I complimented Ms. Bennett, who suffered my child’s off-topic curiosity well, on her ability to keep up with the superstar scribe through the first two issues of Angela; I celebrated the fact that her substory blends seamlessly with the overarching narrative–and that the overall tone of the book is pitch perfect, which is difficult enough for one writer to achieve while living in the Thor-niverse.  She received the accolades well, endearing her to this new fan even further.

Mindful of the length of the line now behind me, I cut my questioning short and asked her to sign my copy of Angela: Asgard’s Assassin #1, which she did gladly.  She countered by offering my daughter and me cookies.  My daughter took her up on the offer so quickly that she didn’t bother taking note of the fact that there were different kinds of cookies on the plate.  Sure, they all looked like chocolate chip cookies; but there were some oatmeal raisins on the pile, too–and wouldn’t you know that’s what she ended up with.

OK, so what if after a few bites she mistakingly identified the raisins as blueberries.

After a volley of courteous thank yous, I scooped up my daughter and let the next piece of Pez–a bespectacled fella who was clearly anxious to have his book signed–claim his spot at the table.  Couldn’t leave, however, without a picture.

We headed to the front of the store, where Anthony, the owner of the shop and architect of the evening, rang us up.  I cast some well-deserved kudos his way while he scanned by books.  My daughter begged me to also cast a few My Little Pony blind bags–strategically placed next to the register–his way, while giving me “Please, Daddy” looks.  How could I not?  As I always tell her: Good girls get good things.  And she was pretty darned good.

As we made our way out, the shop was still buzzing, and the line to meet Ms. Bennett still stretched almost all the way to the door!  Not bad for Android’s first time–Android’s first of many, I’m sure.

Looking forward to more exciting events at my LCS–and to checking out more from the angelic Marguerite Bennett on NCBDs to come.

We decided to dress the part: she donned her Supergirl shirt; I represented with a Rachel Rising tee–and the ol’ Cap cap.  We rocked the rack of freebies:

Excitement was high and hands were full in the comic shop today.

Now, if only Wednesday were Free New Comic Book Day.

Where did you enjoy your Free Comic Book Day?