Back to reality: no NYC this week.  One primo pro, though: no train tickets equals more cash for comics. 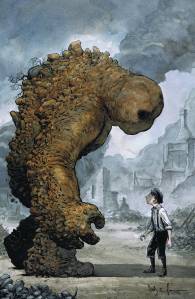 Sure, Midtown Comics is as good as it gets; but there’s something charming about the haphazardly plunked down piles of new books at my local comic shop.  Hope they didn’t miss me–and my money–too much.

What books are you looking forward to tomorrow?