I just polished off my pile for the week.  Rounded out my reading with Daredevil #17, which left me a little underwhelmed.  Prior to reading it, I read a few tweets about it that spoke of the tweeters’ wading in tears.  Well, my eyes, if they welled up with anything,  welled up with bitter beads of disappointment as the back cover settled into its protective position.  I found myself losing interest in the Matt and Foggy backstory and longing for another DVR-ed episode of Franklin and Bash.  (I still have one more to get through before I’m all caught up.)  I’m generally a sucker for father-son stuff, but there was something missing here.  Something genuine, I suppose.  Whatever.  Plus, I wasn’t all that impressed with Allred’s work here.  I mean, it was fine and all; it capably continues the brilliant old-school vibe Waid’s embraced in his storytelling.  I don’t know.  Maybe following Samnee–especially so soon!–works against him here.  Doesn’t matter, really; I’m already looking ahead to the next arc.

Wouldn’t you know: Daredevil wasn’t the only letdown I didn’t anticipate.  Wonder Woman #12 kinda crapped out for me, mainly because of the unimpressive, uninspired transition from one perfectly fine mission statement—save Zola and her unborn baby from the power hungry old gods—to another, all too similar one: save Zola’s baby, yada, yada, new gods.  You know what?  I don’t care.  (Wow.  I can’t believe I just typed that.  A first for my experience with WW, which has been one of my faves since The New 52 kicked off a year ago.)  I’ll buy #13 and will reassess my relationship with the leggy Amazon—who, by the way, had an effective turn in Batwoman #12. 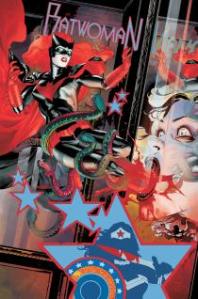 Batwoman #12 was–and I know this will shock some people–my favorite book of the week.  J.H. Williams III’s return to the art side is a triumphant one, with his stunning and unexpected layouts and his attention to detail.   I mean, come on: pages 6-7?  Williams III runs circles around his peers with this spread.  The conversation between Batwoman and the shards of Bloody Mary?  Smashing!  I even like the reason for dragging Diana into the storyline.  In fact, I’m excited about this title again–just like I was from the start of the series—and, brimming and bubbling, I’m definitely on board for #13.

I settled into The Shade #11 and got burned by the bad James Robinson.  I’ll admit: I enjoyed the first five pages.  The Beaumont sequence alone is worth celebrating as heroic and hilarious: the signature of this series right out of the chute.  However, the conversation between The Shade and the pharaohs and the explanation of where the pharaohs came from smacks of the convoluted confabulation of Robinson’s Earth 2. Irving’s art doesn’t do it for me, either.  It’s a bit too, I don’t know, artificial?  There’s something soulless about it, which can be blamed, I suppose, on the computerized aspect of it.  As much as I hate to say it, I really didn’t like this arc very much.  Worth noticing: the slip in quality of The Shade parallels Robinson’s involvement with Earth 2.  Coincidence?

The Valiant books were solid reads.  I like the blood and bullets of Bloodshot #2 and the cerebral happenings of Harbinger #3.  Quite a balance!  The former has already established a classic moment for the burgeoning reboot: Bloodshot’s literally having a cow.  Tasty!  The latter continues to impress in its exposition–except in a pivotal moment where Peter turns the tables on Daniel, shouting, “You chatty tool!”  Yikes!  That could be the silliest line I’ve read in a long time–well, at least since Earth 2 #3.

I fell for Fatale #7; but that’s no surprise: Brubaker’s been bringing his best to this book.

That leaves Rorschach #1.  Know what?  I didn’t enjoy it as much as I had hoped I would.  Azzarello’s story simply didn’t knock me out–and I left my chin out there for him and everything.  I think Crime says it best, really: “Dude, you don’t measure up to your myth.”  (That can apply to almost all of Before Watchmen at this point. Hmm.  I wonder if Alan Moore is finding some sort of joy in that.)  I can’t deny this, though: Bermejo’s art is stunning–from the cover to the final panel.  (By the way, I must address this point: I’ve never seen clothes so meticulously rendered.)  I will give Azzarello some credit: he handles sex better than any of the other BW writers thus far.  Unlike his colleagues, who seem to be clumsy virgins when it comes to carnality, he inserts it and it feels right.  You know?

2 thoughts on “Quite a Weak”